We are a Christ-Rooted and African Centered People!

“Looking unto Jesus the Author and Finisher of our Faith.” Hebrews 12:2

The pinnacle of our week at Fellowship Chapel includes our exciting and unique Sunday worship experiences, designed for adults, teens, and young children.

Sunday mornings at the Chapel begins with Sunday School at 8:15 am, with classes available for adults and young people.   Our praise expressions for our Lord continues at 9:30 am with our Sunday Worship Service in the sanctuary.

We also have concurrent services for our children through our Infant Care, Tot’s Assembly, Children’s Church, and Teen Faith, with the services geared towards the various age groups with age-appropriate lessons, music, activities, and guest lecturers for the teens.

We praise, worship, adore, honor and work for our God from our own Christ-rooted and African-Centered Heritage and understanding. We welcome all to join with us on this spiritual journey.

Fellowship Chapel is an institution dedicated to the Lord Jesus Christ, seeking to bring people to a personal knowledge of Jesus Christ for the saving of souls and the development and enhancement of a total life that is spiritually, physically, economically, socially and mentally whole.

The History of Fellowship Chapel • Founded in 1966 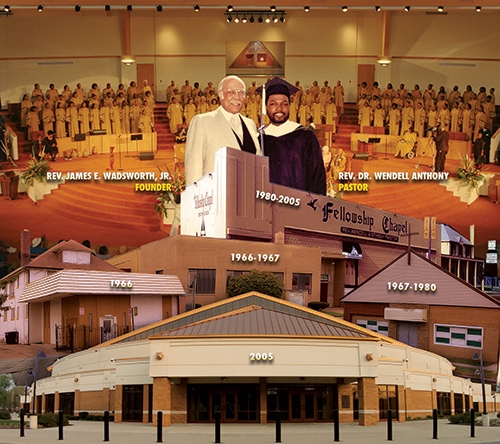 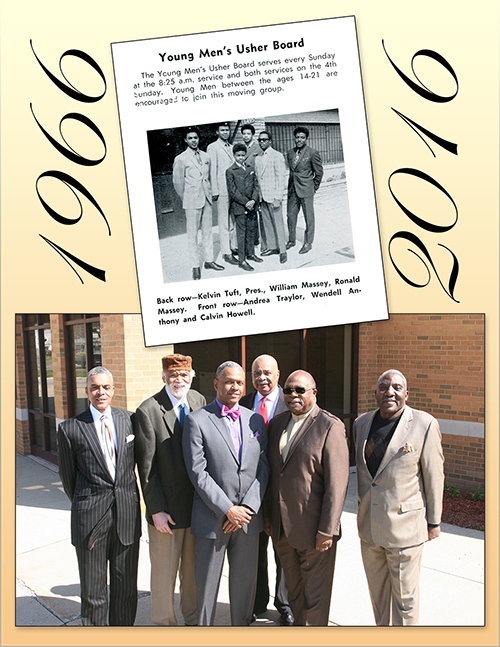 Fellowship Chapel is a free fellowship of men, women and children who are dedicated to the fulfillment of the Christian principles of Jesus Christ in all areas of social, economic, civic and spiritual life. We believe that the chief purpose of religion is the search for those universal truths which will make people free, at peace and productive.

Fellowship Chapel was founded June 5 by 1966 Reverend James E. Wadsworth, Jr. and about 100 founding members. Worship services were held for the first three months of our existence in the Hall Metropolitan Funeral Home, 1931 Dexter, then at the Diggs Funeral Home, 12521 Dexter, until October, 1967.

On October 22, 1967, the first worship service was held at our original church edifice, 18495 Wyoming. Under the spiritual leadership of Reverend Wadsworth, the membership increased steadily and the congregation outgrew that building.

The cooperation and determination of the pastor, officers, organizations, congregation and friends of Fellowship resulted in the purchase of the next church building at 19555 West McNichols, which was dedicated on August 10, 1980.

The Reverend Wendell Anthony was ordained by Rev. Wadsworth, in May of 1983, as the first Associate Pastor of Fellowship Chapel . This appointment was unanimously approved by the congregation.  On December 20, 1986, Rev. Anthony succeeded Rev. Wadsworth (who had passed) as the second Pastor in the history of Fellowship Chapel. This was also unanimously approved by the congregation.  In October of 1986, Fellowship Chapel, in a thrust to extend the work of its ministry, ordained Opal M. Simmons as the first Minister of Christian Education. Under the direction of Rev. Wadsworth, and coordinated by Rev. Anthony, this marked a new era in the ministry of service to the church and community in the area of Christian Education.

As the work of the ministry &nbsp;expanded, Pastor Anthony and the congregation welcomed two new assistant ministers to the staff: on August 21, 2001 Rev. Anthony officiated at the ordination services of Maynard M. Golden and Velva D. Burley.  They would work with the men and women of the church and expand ministry to the youth. Four years later on December 11, 2005, Pastor Anthony officiated at the ordination service for Mayowa L. Reynolds, a new assistant minister.  This position would further expand the church outreach, cultural emphasis and spiritual work of the church.  On October 14, 2012, Rev. Dr. Constance Simon was ordained as the Second Minister of Christian Education.

The church continued to grow under the leadership of Rev. Anthony, with a structure of church officers and ministries that provide spiritual inspiration, social/civic guidance and enrichment to the membership and community.

Through faith and work, Fellowship Chapel’s membership and ministries increased, and it became necessary to expand its physical capacity. Pastor Anthony organized a building expansion committee to address his vision to grow and build a new Fellowship Chapel Village. The committee began to secure land and founded the Amandla Community Development Corporation (CDC), a 501(c) 3 non-profit agency. Through Amandla, which means empower the people, our land was purchased for the church.

In January of 2002, members and friends of Fellowship Chapel actualized Rev. Anthony’s vision of a new village with the historic groundbreaking for the present church building located at 7707 West Outer Drive.  The building was dedicated on June 5, 2005 as over 2,000 people marched from the old location to the new house of faith.