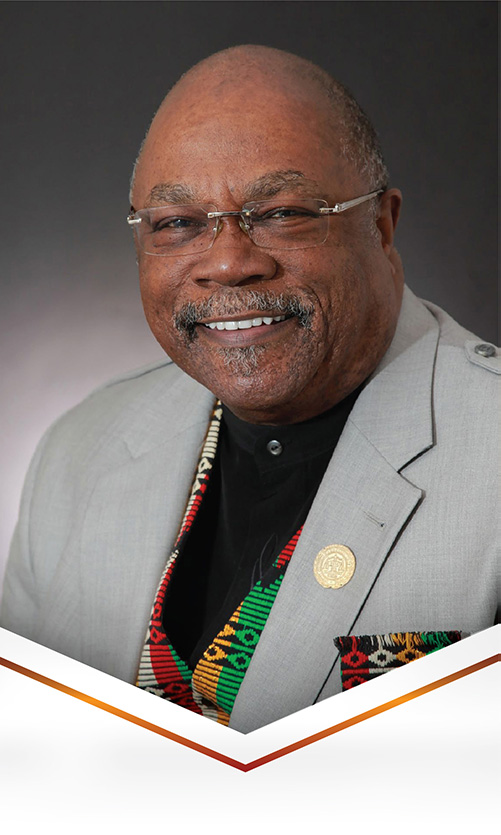 Reverend Dr. Wendell Anthony is a native of St. Louis, Missouri.  He was educated in the Detroit Public School system.  He graduated from Wayne State University with a B.A. in Political Science and Marygrove College with an M.A. in Pastoral Ministry.  He attended the University of Detroit for advanced study in Black Theology.  Rev. Anthony is a Certified Social Worker with the State of Michigan. On May 12, 2007, Rev. Anthony was the keynote speaker for the Graduation Class of Marygrove College at which time the Board of Trustees conferred upon Rev. Anthony the degree of Honorary Doctor of Arts. In 2022, Wayne State University conferred upon Rev. Anthony the degree of Doctor of Laws, Honoris Causa.

He became the Pastor of Fellowship Chapel in December 1986 following the passing of Reverend James E. Wadsworth, Jr.  Through the grace of God and the labor of his ministry, the church has experienced the greatest growth in its 55-year history.  Through its James E. Wadsworth, Jr. Community Center, Fellowship Chapel has a full-time outreach ministry with programs ranging from health and wellness, youth mentoring and development and job training.  Rev. Anthony is the developer of the Isuthu Institute (Coming into Manhood Rites of Passage Program) for boys ages 6-18, dealing with African American male responsibility.  It is one of the oldest mentoring programs of its kind in the country.  He also initiated its female counterpart, the Intonjane Institute (Coming into Womanhood Rites of Passage Program) for girls ages 6-18.

Currently, Rev. Dr. Wendell Anthony is a member of the NAACP National Board of Directors. In addition, he is serving his 15th term as President of the Detroit Branch NAACP, a position he has held for 28 years. The Detroit Branch NAACP is the largest branch in the country. It hosts the largest sit-down dinner in the nation, bringing at least 10,000 persons to gather every year to celebrate and commemorate the struggle for social justice, freedom, and equality.  He is the founder of the Freedom Institute for Economic, Social Justice, and People Empowerment, a 501(c)3 non-profit organization, which also sponsors the annual Freedom Weekend in the city of Detroit. He is also the founder of the Fannie Lou Hamer Political Action Committee, a grassroots community-oriented organization which supports issues and candidates often overlooked by those in the traditional political arena.

Reverend Anthony is the originator of the Take Your Souls to the Polls voter registration and mobilization program. This was initiated to bring about greater youth involvement in the electoral process. He is also the recipient of numerous awards and recognition, locally and nationally. Among them are the Samuel Dewitt Proctor Conference How Beautiful Are Thy Feet Award and the 2021 NAACP Image Award for Activist of the Year. During the pandemic of 2020, Reverend Anthony led and coordinated the Connected Futures Program with business and corporate leaders. This program raised $23 million to provide laptop and Wi-Fi connectivity for 51,000 students, grades K-12, in the Detroit Public Schools Community District. It serves as a model for the nation.

On June 5, 2005, Reverend Anthony led his congregation, community and business leaders, government officials, supporters, and well-wishers in a procession to the new Fellowship Chapel called The Village, for its grand opening and inaugural worship service.  The Village contains the new church and soon to be developed 140 units of multi-family homes and senior citizen residencies. This is a $60 million-dollar project which will result in the building of a new community.

In September 2005, Rev. Anthony married Monica G. Anthony. They are the proud parents of three adult daughters (Tolani, Maia and Theresa) and in 2011 a new addition was added, young Ms. Wendelaya Adiah Anthony.